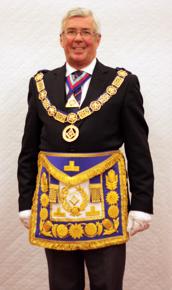 Each year, early in May, the Province of Bristol holds two significant events: the Provincial Grand Lodge (PGL) and the Provincial Grand Chapter (PGC). They are in effect the Annual General Meetings of the Province; Craft and Chapter respectively. For those newer Masons who may have heard of these events, but not been aware of the detail, the PGL and PGC are large events where the PGM hosts his colleagues from other Provinces in the South, South West and Southern Wales. There is no shortage of gold chains on show! The meeting is opened with formality and dignity and there is an agenda of business items. The most important of these is the appointment of the new Provincial Officers and each is presented with his collar of office by the PGM. The PGM then delivers an address, reflecting on the year just gone and the year ahead. This year, due to certain circumstances, the address has gone to a video. I hope that you enjoy the home recording and trust that it covers the bases which I would normally do at this time of year.