In 2016, Southmead Hospital Charity launched its Prostate Cancer Care Appeal with the aim of raising £2million for the purchase of two surgical robots to treat 1) more men with prostate cancer and 2) to expand robotic surgery into other urological and gynaecological cancers.

The BMBI had made an initial donation of £2,000 for prostate cancer research in 2015, the year before the Appeal was launched. In the next 3 years donations totalling a further £12,000 were made, specifically targeted towards the purchase of surgical robotics.
A Provincial initiative to increase men’s awareness of health issues in general, and Bristol’s masons in particular, resulted in the Provincial Health & Wellbeing Group being set up in 2018 to ‘educate’ and inform on medical matters. Its first event was November’s Prostate Awareness Day which was attended by 85 men, the majority being masons. Clinical investigation showed that 13 brethren were at risk of developing prostate cancer, and of these 7 were subsequently diagnosed with prostate cancer and are now receiving appropriate treatment or monitoring.
The Prostate Cancer Care Appeal has now finished and on 2nd July W Bro Paul Binding was present at Southmead Hospital for an informal evening with the organisers of the appeal where it was announced that the first robot (purchased in January 2018) had already operated on hundreds of patients, and that the second robot had now begun operating. 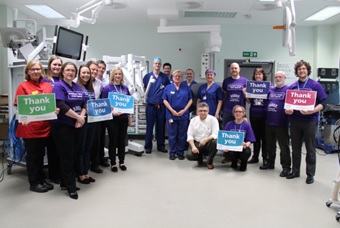