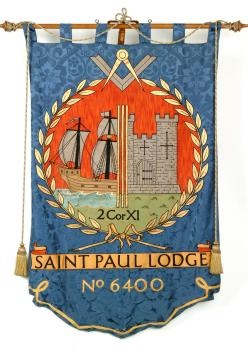 Warranted on the 4th December 1946 and Consecrated on the 8th March 1947, the Saint Paul Lodge meets on the third Friday in March, May, December and fourth Friday in October, and holds its Installation at the May meeting.

It may come as a surprise to many to learn the Thomas Dunckerley was instrumental in starting the move which resulted in the naming of St Paul Lodge. Further action in 1910 by Bro. Powell and Littleton provided the next step towards action.

In 1789, Dunckerley laid the foundation stone of St Paul’s Church on Portland Square with “masonic honours”.

The fact that Dunckerley laid the stone and that Powell and Littleton included the occasion in Freemasonry in Bristol resulted in a founder recollecting “St. Paul’s Church and Masonic Honours” and this eventually resulted in the adoption of the sacred name of St. Paul.