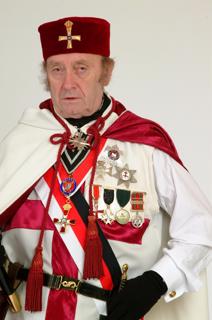 It is with much sadness and regret that we have been informed of the sudden passing to the Grand Lodge above of Worshipful Brother Basil Rex Woodward on 21st December 2020 aged 89 years, a gentleman and true Bristol Mason.

Basil was Initiated into the St. Stephen Lodge 3145 in September 1961, exalted into the Chapter of Charity in April 187 in 1965, he served the Province as Provincial Senior Grand Warden in 1988 and was promoted to Past Junior Grand Deacon of the United Grand Lodge of England in 1998. He was also a member of the Degree of Mark Master Masons and appointed to the rank of Past Grand Junior Overseer in 2005.

Basil was a member of many other degrees and orders, but his greatest love and masonic achievement was to be Installed as the Most Eminent Grand Superintendent of the Camp of Baldwyn, serving as its Provincial Prior and Very Illustrious Inspector General 33° for the District of Baldwyn for over 24 years.

In his working life Basil was a Professional Architect and became responsible for the upkeep and maintenance of the fabric of Freemasons Hall, 31 Park Street, Bristol for over 50 years, he was keen to ensure that the Hall kept its authentic period appearance, he is famously known often quoting his reminder to all” Attention to detail, Brethren”

He will be very sadly missed not only by the Province of Bristol but to Masonry in General.